David Suzuki’s television program the Nature of Things highlighted UniverCity as a healthy, walkable community on ‘The Weight of the World’, as did Metro Vancouver on their program ‘Our Livable Region’.

UniverCity is also often featured as a leader in sustainable development at workshops and conferences across Canada, the USA, and beyond.

2009 Urban Land Institute – Award for Excellence: The Americas for Best Practice in Design, Architecture and Development

2007 City of Burnaby – Environment Award for Planning and Development

2005 Burnaby Board of Trade – Newsmaker of the Year Award 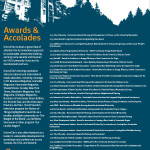